What The F*ck Is This Sh*t?: Beauty & The Beast

Dear Reader! I am introducing a new segment. This is partly an homage to one of my favorites, Joe Vargas, known as Angry Joe from thatguywiththeglasses.com. If you know him you have probably seen his review of Steel Batallion: Heavy Armor (click here to see!) which he starts off with a very honest sentence "What the fuck is this shit?" and I have to be honest, I feel that way myself very often! Now I have tried to review a couple of bad things to warn you about what is out there - but there are some pretty horrible things that need mentioning and I will discuss them in this segment. It will be more like a rant of how shitty things are and how Hollywood is trying to get your money for their awful project, rather than a review... However, you will see the point!

That said, let us discuss the trailer for CW new show: Beauty & The Beast.


Now... WHAT THE FUCK IS THIS SHIT?!
Let me tell you something, a new spin on the classic tale? It is more like "this is nothing like the classical tale". The basic story of the Beauty & The Beast is how both characters learn to appreciate and love what is on the inside. I don't know if you are seeing the problem but the, erm... "beast" looks like a model for Men's Health magazine! AND NONE OF THE CHARACTERS ARE LIKEABLE! No offence to her because perhaps it is the directors who can't work with her, but so far there is only one side I have seen from Kristin Kreuk and that shows me that SHE CANNOT ACT! She is completely incapable of showing any emotion beside fright and fear. SHE IS SUPPOSED TO PLAY A COP! Does she look like the person you'd want to trust when in trouble? No. Cops do not need saving - don't get me wrong, I understand that in order for her to ACTUALLY get into dangerous situations they needed for her to do a job that is involved with thugs and guns... but for fuck sake, HIRE AN ACTRESS WHO DOESN'T LOOK LIKE SOMEONE WHO JUST WENT THROUGH PUBERTY! And the beast... a super soldier serum? Are you like fucking kidding with me? What you had a Captain America marathon before presenting your pitch to CW? And you even got that wrong because this version turns into the Hulk! If Disney wasn't already flush with cash thanks to the Avengers, I am pretty sure they could sue you and they would win!
Not to mention that this is supposed to be a remake of the 1987 series with Ron Perlman and Linda Hamilton... really? Let me tell you two things about remakes: do you know why Melrose Place failed? Because it was too much like the old version, it reeked of 1992 and people have changed. Do you know why 90210 and Dallas are hits? Because they kept 35% of all the good elements and were able to transport it into our every days. They made it more modern in the good way. Do you know why this sucks? BECAUSE IT HAS FUCKING NOTHING TO DO WITH ANYTHING! NOT THE BOOK, NOT THE CARTOON, NOT THE SERIES, NOTHING!!!!! Nothing makes this modern, nor does it have to be! 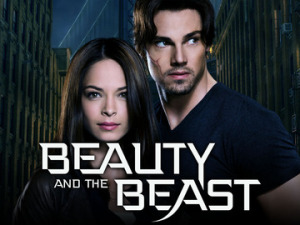 I'll tell you what this is, do you miss Moonlight? I am sure you do, it had a cult following of incredible numbers, and what did we like about that? The sexy heartbroken can-do-it-all vampire and the charismatic journalist who stops at nothing. And did you like Lana in Smallville and wished Clark would've saved her a couple more times? Well, here is your wish! You get your vampire like supernatural hero who saves Lana again! Don't believe me? Lana's cop partner is played by the SAME FUCKING ACTOR WHO PLAYED THE COP ON MOONLIGHT!!! THAT IS HOW LITTLE YOU ARE TRYING CW!!!
What more do I have to say? How did this pass any of the focus groups? Who in their fucking right mind said that any of the issues these two have can be relate-able? I'd like to quote Allison Pregler aka Obscuras Lupa here, who's review of the pilot you can see if you click HERE (and please do, she really sums it up perfectly!):

"I have never seen anything miss the point so monumentally in all my life. (...) By turning him into a hot guy who turns into a monster sometimes you have eliminated everything that made Beauty & The Beast romantic, tragic or interesting for that matter."

I have come so far to think that the 'beast' is supposed to be Kristin Kreuk... no offence, even though this guy isn't my type, just look at him. When you think of Beast, is this what you see?
And... oh boy... over the past 3 years the biggest trend is to put ONE British character in the cast. Why is that? I have no fucking idea... If there is one thing I learned from being an English major is that Americans hate the Brits. It is not a generalization, I am telling you honestly! From stand up comedians all the way to old historical facts that led to the separation and independence. This is even more disgusting because it has become a sort of unspoken law, like putting all minorities in the shows (look for the african-americans and the latinos! They are there. Easy to find too, they are the first ones to die!). But the only purpose the British cast members seem to serve is drive you FUCKING insane with their fake sounding accents next to the Americans. The pretty one who got the honor of starring in this piece of crap is Max Brown, who I loved both in The Tudors and MI-5. This makes me believe that they cast him because he is famous in England now... nice going! Real classy.

Please do not watch this. Simply do not. Don't download it, don't TEVO it or watch it just don't, please please don't. I want this show to get cancelled so fucking bad that it is driving me insane!
Bejegyezte: CsorEsz91 dátum: 6:07 PM