About a year and a half ago I came up with the idea of making my own version of 'Romeo & Juliet'. This was a bite off more than I could chew at the moment... however I did not give up!
The song we have chose is from 'Le fabuleux destin d'Amelie', the waltz by Yann Tiersen. Personally I hate this movie, however almost three years ago, on a December evening, I got to dance to this song with someone who was very dear to me at that time. But faith would have it, our paths never really crossed again. Let's just say that we 'weren't meant to be', just like Romeo and Juliet. That is way I decided to use this song for my video. 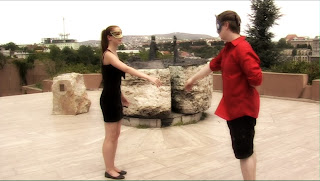 The story is quite simple, a boy and girl pass each other and we see that the girl wonders what it would be like to be with the boy. Throughout the video they have masks on. First of all, this refers to the masquerade ball where the two iconic characters met for the first time, and also to the fact that these two people never actually met. Hence the title. There is only the illusion of belonging one to the other. They dance, they get married, they separate out one point, only to meet up again for a last time. At the end we discover that the boy fell into the same fantasy, wishing to meet the girl, however when he turns around to look at her, she is with her boyfriend and the two go on in with their lives, as if nothing happened.

In our lives we fall in love a hundred times on buses, trains, planes and so on. I wanted to capture that moment, seeing that usually all love stories, except for the one we just adapted, has a happy-ending  And well, they don't really, do they? Also I wanted to put in this small joke of Juliet actually ending up with Paris, because she had never met Romeo (so her boyfriend is credited as Paris). But most importantly I wanted to avoid the tragic ending. We all know how this story ends, we needn't any reminders! However the only way to avoid such and ending, while avoiding the happy tale version as well is to transport the story into a fantasy that never actually reaches reality. 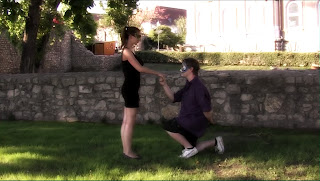 In the video they are separated by two strong colors. Romeo is usually defined by blue colors, while Juliet is red. Seeing that I wanted to create a more modern version, in mine Romeo was purple, while Juliet black. However, after the wedding scene, Romeo starts to wear red for two reasons: he two is now a Capulet and red symbolizes the death of Mercutio and Tybalt as well. My friend told me that people will not get that... I'm sure he is right, that is why I am writing it down now.

Blooper reel (Audio: Hungarian, however most of it is enjoyable just the same)

The casting was a bit hard, seeing that the two people who were supposed to play the leads were, later on, by me fired. Unfortunately I felt that they did not care for it as much as I did and therefore I preferred to not work with them at all. 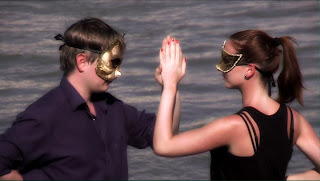 The criteria to find Juliet was quite simple: long hair, knows how to dance, is willing to appear on camera. About 2 people remained on my list from the 200 girls I know and the choice was obvious. Juliet is played by Kutas Orsolya, she is the singer of The Oldhillers (click here to see their facebook page!) and my classmate at the university. She was perfect material and she loves to dance. At that point I needed a Romeo who was tall enough and had at least once danced before. My choice fell onto Lőrincz Lénárd, one of our more talented actors, who kindly accepted the role.
The staff was composed of Váczi Zsombor, my director of photography (look up his blog The Watermelon Man's Blog here or his YouTube channel here!). Without him I would be lost, as my talents in the technology department are quite limited as far as cameras go. The same goes for Halák András László, my photographer. He was also forced to play the part of Paris, seeing that in height he was perfect for Orsolya, not to mention that he is completely different than our Romeo, so he enhanced the dividing factor between the two leads. (to see András' photos taken on the set click here!). My first assistant was Kadosa Nikolett, without whom I wouldn't dare starting to film! She has appeared in all of my works, either in front of or behind the camera. Lastly my second assistant was Váczi Kincső, who joined us after Nikolett had to leave. I am grateful to her as well.

All in all I am extremely proud of the work we achieved as it is 99.9% the way I imagined it in my head and on many levels even better. I had a great time filming; great time working together my friends. And every single time that I want to think back to that one person who was dear to me, I can just click twice on the video and feel that our story has been portrayed in a 4 minute video. That is something not many people have, and I wouldn't either if it weren't for my friends. Thank you all.


To view the finished video, please click on the picture below. 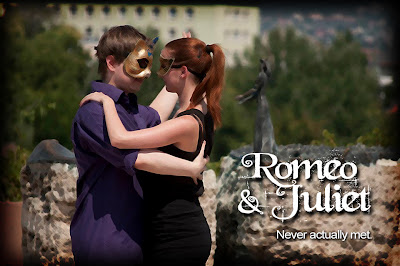 Click on the picture to view my other two videos: