This year I am currently doing a media specialization while majoring in English and for one of our classes we had to present a work of art of your choosing. I decided to choose the following picture, of which you can read my description below and check out my classmates work on the teacher's website here:

Japanese manga artist Tsukasa Hojo has been one of the most influential writers from 1980's to the 90's. 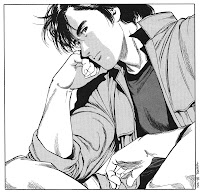 His first manga to catch the eye of the public was entitled Cat's Eye. A series that featured three sisters who operate a café during the day, and worked as thieves during the night: their father has disappeared and they are trying to recollect his art work to decode a message. The second manga was City Hunter, whose two main characters you can see in the picture. The story talks about Ryo Saeba, a sweeper in Tokyo, whose partner Hideyuki Makimura dies and afterwards he takes in his sister Kaori. The two fall in love, however Ryo denies all of his feelings. All of this because he wants a better life for Kaori: being private investigators, assassins for hire isn't every father's dream for their children. To understand the picture you need to understand one character: Ryo. He keeps pushing Kaori away and acting as if she was the last person on the planet he could ever be attracted to. That is why on the picture you see her as a sex symbol as she hugs herself and pushes her breasts up a bit. Yet Ryo keeps staring at his lighter. He is a big time smoker, so the lighter is one of the few accessories that is never missing from his pocket. You can also see that a light shines on Kaori, while Ryo stands in the shadow. This is because unlike Ryo, she still has a chance for a better life, while being brought up among soldiers on the battlefield - there is really nothing else he can do as a profession. The picture also recreates Kaori's feeling of being completely alone while there is someone standing right next to her. 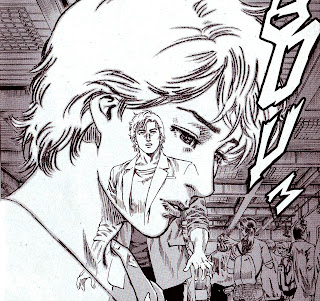 In 1991 City Hunter ended and even though plenty of animation shorts have been created since by other artists, it wasn't until 2001 that Hojo decided to continue the series with a little twist. This was Angel Heart: set in an alternate universe where Kaori dies and her heart is transplanted into a young girl, Shan In. She has the same past as Ryo, being brought up as an assassin, but she wants to get out of this lifestyle. Ryo adopts her so Kaori's heart stays near him and he gives a chance for Shan In to have a life where she is surrounded by family instead of assassins. 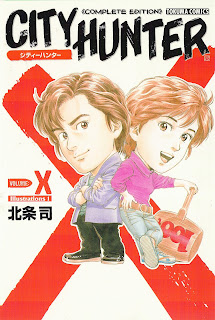 Manga artists have fantastic skills and their drawings are often collected into illustration books once a chronicle ends. Three complete books by Tsukasa Hojo containing City Hunter art have been published. These contain drawings and paintings made during and for the manga series - as well as the cover artwork. People don't even think about the incredible work that goes into creating cover art. "Don't judge a book by it's cover." Well, everyone does and manga artists have to make sure to come up with something that will raise interest in everyone when they get onto the shelf of a newsstand. I believe that this image would catch the eye of everyone and gratify the readers who followed the story from the beginning.
I am huge comic book geek (as you can find out from by blog), however City Hunter is my absolutely favorite manga of all time. It has the most charismatic characters ever drawn on paper and some of the best adventures. I also love detective stories and these are spiced with romantic features just enough to satisfy the female, without losing the male audience. I think of it as a classic, and so far everything categorized as such is considered to be excellent. Trust me: this manga qualifies perfectly.
Bejegyezte: CsorEsz91 dátum: 7:17 PM