THE DEATH OF THE NOSTALGIA CRITIC

You don't know me, unless you googled yourself and on the 7000th page you found my blog. But I am pretty sure you didn't... on your site thatguywiththeglasses.com I also have an account, I am CsorEsz91, but I never read comments because although your followers seem to be a lot more human-like than YouTube commentators, still, I don't like to read them. And I am a firm believer that my comments never reach the people to whom I want to talk, so I just end up not commenting. I did, about three times, but that is all.

I remember, that about two years ago me, my brother and my sister were looking for nostalgic 80's cartoons on YouTube when a video by you appeared (I believe it was He-Man). We watched it and laughed as hard as we have ever did in our lives. Even though those videos were stolen and reuploaded, they still had your site on the bottom so we found our way to the Glasses mansion and discovered a lot more than we hoped for. I remember that what made me happy above everything else was that your reviews were still going. We watched all of your nostalgic videos in about two weeks (my brother only comes twice a week to visit us!) and we couldn't wait for new ones! What really caught our attention was that we could find plenty reviews on new works, but we don't really care for them. We read slashfilm, we watch Breakin' It Down with Catherine Reitman, and the Bum Reviews, but all those horrible movies from our pasts and all the movies that we did love still needed a kick in the butt: you were that kick. 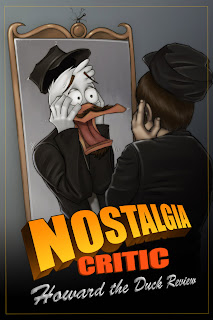 What I remember most vividly was watching your "The OTHER Animated Titanic Movie" review and it was in that moment that I decided that I wanted to write down movie reviews too. I know that people barely read them, I'm not very optimistic, but I find writing to be very therapeutical and I believe I have to thank you for pushing me toward that direction. Your rage and yelling and always complaining... it was a bit much but it made me realize that I have plenty to complain about as well! :)

But I do have to admit that I don't watch Ask TGWTG, nor any of the specials really. My brother watches them and then he tells us the important information and/or we rewatch them together. But I had no idea that you were going to kill this character. Yesterday we finished To Boldly Flee and I was just sitting there like "What the fuck just happened?". Then my brother clicked on the video and then this happened: 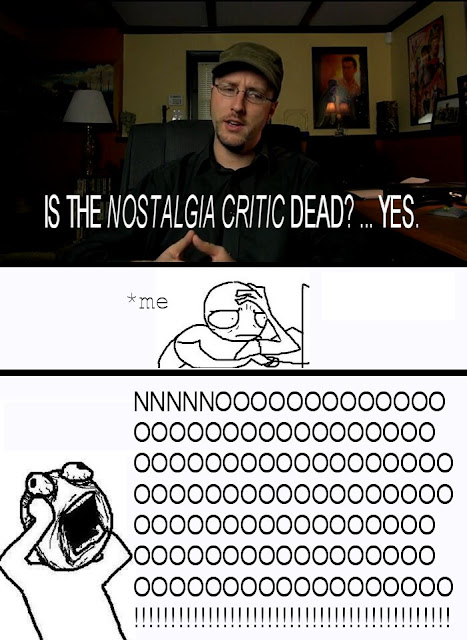 I was crying, I'll confess. THANKFULLY I can still look at Lindsey's (Nostalgia Chick) stuff if I want to be really nostalgic, but still, it is not the same... I will admit however that your character has changed drastically. You said in your sort of goodbye video that it was hard for you to come up with more ways to hate things - while in the beginning you didn't really hate everything. You did point out when something was silly or even stupid, but I remember plenty reviews were you still liked the things you reviewed. Really, why couldn't you go back to that? And seriously, Scooby Doo for last review? I did not like that review at all. 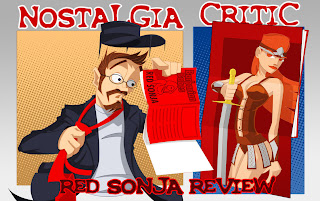 I actually like that movie, but I do concur that it has plenty dumb elements, even though I find that it is not the worst movie ever made... All this is beside the point. The point is that I might be the dumbest person on the planet but no - I did not figure out that you were going to kill the Critic. How?
I never thought of the Critic as a character. For me you were the Critic who did a couple of characters, like the Bum or Zod. And you were still the Critic when you reviewed new movies, you weren't nostalgic, but still. What I want to say is that I understand why you had to do it, but I am an eternally weird person: I don't even think of The Simpsons as something that is ran into the ground. I think of it as a series that people want - and as long as people and fans will watch it I do not see the point of cancelling it. For me you are Firefly and I look forward to every cameo as fans looked forward to Serenity (you need to be a real sci-fi geek to get this reference!). Still I am really sorry that this happened. I did not see it coming. 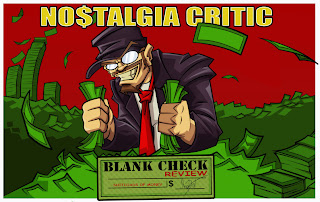 Looking at your video I can see that you are plenty more enthusiastic about your new works, so I decided to trust you. Still, the reason why I decided to write is and will be because of The Nostalgia Critic made me do it. I am not famous, my views aren't really high, although I can't complain, I am proud to have reached these numbers on my own. And I don't think I will stop because you did, after all, we have nothing to do with each other and I shouldn't be so sad about it... yet. Yet I am. My own enthusiasm level is now below zero.

I do not want to blame you for that, no. Actually I want to thank you. You opened up a whole new world for me, you've given me the chance to see that people with their stupid artistic views have a chance to make something of their lives thanks to the internet. Although Hungary is still far from making money from this, you made me hopeful. Thank you for that, thank you eternally.
I am and will always be your biggest fan Mr. Walker and I am looking forward to what you have planned for us.

PS: I am not the only one who thinks so, but please, WE WANT MORE PUPPET CRITIC!! Thank you Lindsey for that!!

Update: A new version of this character has since been brought back to life, nonetheless, the format changed a lot and I ended up not watching it anymore. All my respect to the writers and actors on the show, don't get me wrong, by it isn't my style anymore.
Bejegyezte: CsorEsz91 dátum: 6:20 AM