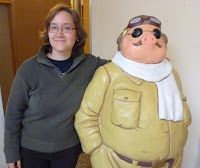 In March I accompanied my dad to Brussels to a conference, and one of the afternoons we decided to go to the Belgian National Comic Strip Center. In the gift shop I've found many of the things that I knew from my brother's shelf: The Adventures of Tin Tin, Asterix and of course Lucky Luke. But, as I strolled around and looked at posters, I've found him: Blacksad. The sexiest cat I have ever seen in my life. You heard me! He is hot! And immeadiately I wanted to know more, so I got my hands on the comics. 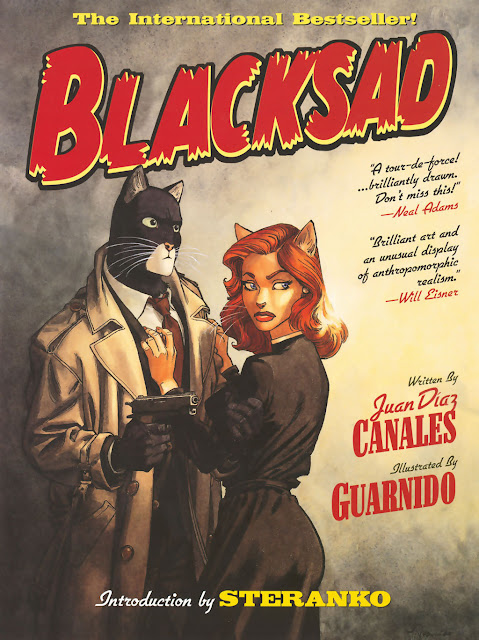 Blacksad was created by Juan Díaz Canales (writer) and Juanjo Guarnido (artist) for a French audience. The spanish version followed usually a month later; and Dark Horse Comics released a translated version after the original American publisher declared bankruptcy. The whole comic is compiled of four numbers that stand completely separate from each other, although there is a thin line that connects them. The series even recieved the Eisner Award. 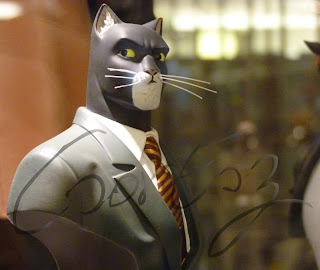 The stories are set in an alternate universe where humans don't exist, only animals do, but they behave and dress like humans. It is also set in a film noir style, our lead being a private investigator in the 1950s. Our main character is John Blacksad a black cat. He also has a sidekick, a reporter by the name of Weekly, who is the most annoying weasel he knows - but is also the most trusted ally he's ever had. Last but not least, Smirnov, a German Shepherd who is the police comminissioner in their town. He is a good friend of Blacksad's, although he doesn't always agree with his methods. 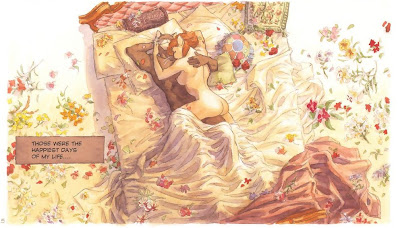 The first number of the series was Somewhere Within The Shadows. This story tells us a bit about Blacksad's past, as it is his ex-girlfriend's murder that he has to investigate. She was Natalia Willford, a known actress. Although originally he was only her bodyguard, their attraction toward each other was clear soon. The two however parted ways and while trying to find the killer Blacksad goes through a line of corpses. Everyone seems to be hiding someone, which creates the possibility that someone quite powerful is behind her assassination. Blacksad discovers that the killer himself is a frog - the biggest businessman in their town - who killed Natalia because she cheated on him. But Blacksad cannot hold back his anger toward the kind of men who believe they are above the law and he shoots him in the head. 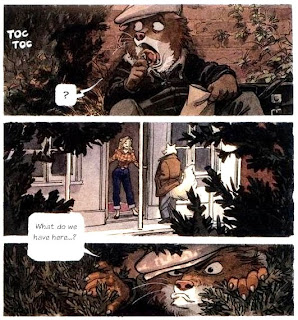 The second number was Arctic Nation.This storyline is a bit more serious as it is basically a social commentary against segregation. The animals with white furr (polar bears, Arctic foxes etc.) behave like nazis towards every other animal, especially the ones with black furr, among them Blacksad. But this isn't his town, he was called here to investigate the death of the mother of a little deer girl. His search leads him to the Polar Bear, Karup, who had fathered two children with a black furred lady. The mother and her sister try and take revenge on him, however the mother dies trying. The horrible missions of the nazi group is discovered and although it is because of this murder, still, it is in this story that Blacksad meets his sidekick Weekly for the first time. 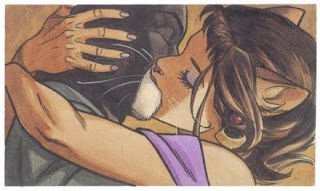 The third installment of the series is entitled Red Soul. In this storyline we are given another glimpse of Blacksad's past, as he meets up with his old school teacher, Otto Liebber. However this is one of my favorites because Blacksad has a romantic storyline, precisely with professor Liebber's assistant Alma Mayer. Turns out that the professor used to work for the nazi regime and he helped create nuclear weapons. This doesn't go so well as the government is trying to rid of their connection with the professor and in the process frame Alma's fiancée and Blacksad as well. Blacksad manages to get Alma away from the FBI, as her fiancée set her up instead of him, and the two fall in love. But just when they get a chance to elope together, the FBI arrests Blacksad. I don't want to spoil the ending for you, trust me, this one you'll want to read! 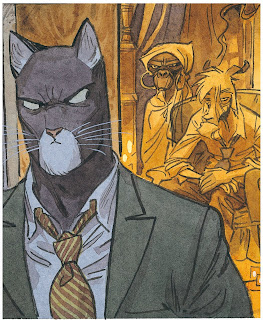 So far the last pubblished number of the series is The Hell, The Silence. I have pretty weird feelings about this one as I find it to be the saddest and yet the most beautiful of all the stories. Also it is set in New Orleans and I love those stories, an example of my favorites would be The Princess And The Frog.
Anyway, the story tells us that Blacksad and Weekly have been hired to find a drug addicted musician, Fletcher by his manager, who is terminally ill with cancer. However he finds another connection among the two, the cancerous patient's son is in love with the girlfriend of Fletcher. But during their search for him the girlfriend goes into labor and the son forbids Blacksad from seeing her. Finally Weekly arrives to tell him that he has found Fletcher - but when they get to him he is already dead because of an overdose. Blacksad discovers that the man who commissioned him actually has a rare genetic disease instead of cancer and he uses musicians to gain money in order to help clinical research along so his son won't go through what he will.

So you can see the thin line that connects the stories, but they are excellent on their own as well. What I appreciate as a fan is that I like very much both  Weekly and Smirnov, and they alternate between stories, giving you always hope that no matter what kind of mass Blacksad gets himself into, someone will dig him out of the hole.
The art work is fantastic, the stories are great. I especially recommend it if you are a film noir fan or if at all you enjoy alternate universes - it is a win win. A Blacksad postcard I bought in Brussels resides on my shelf and every morning I wake to his smile, it is great. You might not come accross it unless you look for it, but if you are a hardcore comic reader, trust me, you'll want this in your collection! 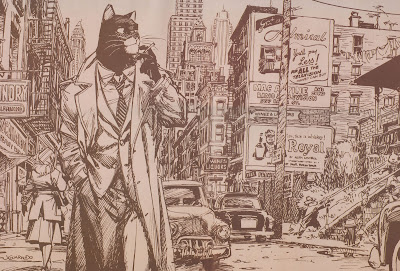