What's Next On My Marvel List? (Movies) Thor and Ghost Rider 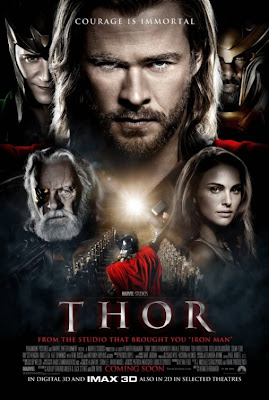 The God of Thunder is sent to Earth after disobeying his father's rules. But just as he comes acquainted with the curious species that the human kind is, back on his planet his half-brother Loki, the God of Mischief, is trying to take over their home. He, after finding out that his father has lied to him since he could remember, realizes his hunger for power and his jealousy over his brother Thor's right for the throne can't be suppressed anymore. Loki takes over just as Thor gives up trying to get back home. Loki, set on destroying his brother for good, sends the Destroyer to Earth to kill Thor, but this only triggers his true self and awakens his hammer which help him in defeating it. Thor is needed back home, which means that he must leave behind a girl, Jane, a scientist who has been trying to understand the universe for years now - Thor representing the key for that. Back home Thor has to destroy Asgard's transporter in order to stop Loki's plans, but this results in losing Loki too to the vast space. Unsure on how to return back to Earth, Thor is set to wait to see Jane again, until the Avengers. 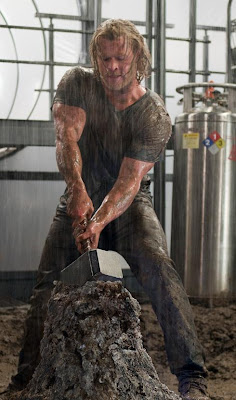 Thoughts? I watched this movie in fake 3D, because they wouldn't show it in 2D with the original dubbing - and I did not want to see it in Hungarian! Therefore I had to suffer through an already dark movie with (basically) sunglasses: I couldn't see shit during his fight with the ice giants! That aside, I really liked the movie. First off I've heard that Chris Hemsworth's brother Liam Hemsworth had auditioned for the role too, but in the end it went to Chris. Honestly I am glad about that, because although Liam is a very charismatic fellow with great abs and charm, he would've been to young to play both Natalie Portman's love interest and Tom Hiddleston's older brother. I wouldn't mind seeing him play Thor in a prequel that is set solely in Asgard, but he wasn't good for this movie in particular. Joe Vargas, aka Angry Joe (click here to see his reviews!) said that just because Kenneth Branagh didn't screw up a comic based movie, that doesn't make him exceptional. I can agree with that, but let us be clear that Thor can be incredible boring... he can! I did not know about him until I saw him in the Avengers cartoons. And although I got myself a couple of cartoons that feature him, I still don't care for him. I loved this movie because it makes him interesting. You get to see him grow from a spoiled little boy to a grown man able to take on his responsibilities. You also get to see him fall in love; to find someone who is more important then himself, someone he can care for and even give his life for. The movie has a wonderful twist that you don't see coming, assuming it will only follow all the other clichés, I don't want to spoil it, but every time a movie surprises me, they get two thumbs up! Not to mention that the cameo of Hawkeye was a really good move in order to establish him for the Avengers. Altogether the movie has beautiful visuals, it has a couple of really great jokes and is a very good origin movie. Make sure you look it up before the sequel arrives! 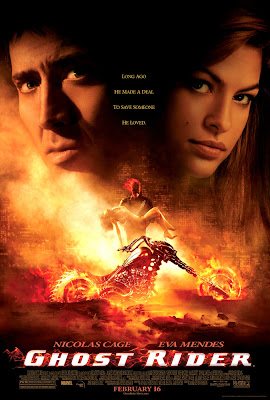 Yes, yes I did like it, I like EVERY comic movie! Get it through your head so we can avoid these useless sad moments where you barf all over my opinion and just read what I have to say! 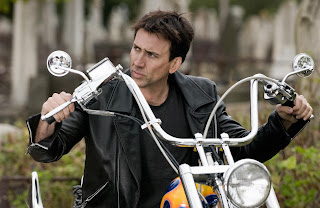 Johnny Blaze is a teenager who is given the chance to save his sick father: he has to sign a contract with Mephistopheles who will remove his dad's lung cancer if he gives away his soul and one day, when he is needed, he will obey to his commands. Johnny signs the paper and all seems well, except his father still loses his life in a motor accident. Johnny, afraid of the consequences or having to choose again leaves his girlfriend behind and starts a new life as a stunt motorcyclist. He mostly does this to test how many things he can survive before he falls to his death, but we all know why he is alive. One day Roxanne, the girl he left behind shows up again and while trying to get her back Mephistopheles arrives as well. Johnny is told that he must perform his duties and it is then that he is transformed into the Ghost Rider: a skeleton on fire that uses chains as his weapon. It seems that the Rider knows no boundaries and destroys everyone - even someone who cheated on a test. But Mephistopheles needs him to fight off his own son Blackheart, who seeks his father's power. Johnny finds a way to defeat Blackheart and tells Mephitopheles and he will keep this power to fight evil and save the innocent.
Thoughts? Nicolas Cage gets all kinds of bad reviews, I don't care for them. I really like him. I have never read a Ghost Rider comic book and yet I've found a way to enjoy the movie. Although the corpses are eternally disgusting and the villain's henchmen made me have nightmares for several weeks, the story is still pretty damn good. Are there plot holes in it? Of course. Did it have a couple of silly scenes? Plenty. Was it visually awesome? You bet! The rider looks great. His transformation keeps you locked onto the screen like nothing else and even the chemistry with Eva Mendes had me convinced. I don't care to read why people disliked it, mostly because even if someone writes a normal comment, by the 5th it becomes a piss fight that doesn't talk about the movie, so I'll just keep it to myself. But the 5.2 grading on imdb is really off, trust me! 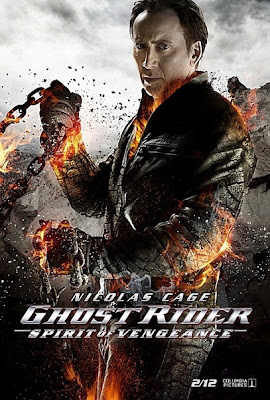 Johnny is in hide-out, he is scared of turning seeing that he cannot control his Rider self. But he is approached by a believer saying that a boy is in grave danger of being used by Mephistopheles, who for some reason in this movie is called Roarke, so we'll just go with that one (it's easier to type!). Johnny sets out to find him, and although he does so for the price of getting his soul back, turns out the good guys they trusted the boy with want to kill him before Roarke can use him for more evil. However, after gaining his soul back, Johnny is incapable of saving the boy and he winds up with Roarke just the same. Turns out that just as he gave up his soul for his father, the boy's mother made a deal too with Roarke - he is the boy's father. In order to defeat Roarke and to stop him from using the boy for evil, the boy gives Johnny back his Rider alter ego. They defeat him and Johnny finally finds out who he is: the Rider is and Angel who was tricked to go to hell and being oppressed he turned to the angry spirit of vengeance. But Johnny finally manages to channel it's true self and use the Angel's power for good.

Thoughts? My last sentence: Johnny already did use this power for good all throughout the movie, so what the hell? But, that is not the biggest question here. How did this movie get made? The first one received pretty bad reviews. One day I saw the trailer the next week I saw Nicolas Cage on Saturday Night Live promoting the movie and I was shocked that I knew nothing about it and it was already playing in the theatre! Since I got pretty scared during the first one I didn't want to see this in the theatre, but I was looking forward to it since I liked the first one. First off Mephistopheles is played by someone else, and thank god for that! Ciarán Hinds does a far better job at being the Devil than the silly Peter Fonda. In addition the CGI is wonderful in this one. You wouldn't think that a skeleton can show emotions but he can. It's really great and I also liked it that he had a bit of a burned skull instead of a nicely washed white one. In addition there wasn't a love story and I preferred that since this movie is more about him discovering himself and understanding that he is given an opportunity to do good here and not look at life as a waste or a curse. That said, biggest problem is that I'm not a believer and if a movie has the Devil in it, it is bound to have God as well and I didn't care for those scenes, even though they make up 2/3 of the movie. Also Johnny has these weird scenes where he laughs hysterically for no reason... that was a bit off. And finally the villain he has to fight looks ridiculous! He couldn't scare nobody. BUT the biggest problem of all was that all through the movie I was sure that this was written by the same people who wrote The Incredible Hulk (click here to read my review!)! He hides, tries not to turn, afraid to hurt the one he loves, he finally gets rid of the curse, has to get it back to save the day. WHAT THE HELL? Literally nobody was bothered by that? Seriously... And also it seems that he can control the Rider self all through the movie even though he said he can't. This problem also occurred in the Avengers where Bruce seemed to be completely aware of what he was doing, how?
The movie is quite good for an action film, I wouldn't really call it a sequel, as in it has nothing to do really with the first one, but it has a pretty cool recap at the beginning that tells you all you need to know. But you do need some sort of knowledge about the Ghost Rider to enjoy it. I wouldn't call it the worst one, nor the best. Check it out!
Bejegyezte: CsorEsz91 dátum: 11:28 AM