Before we begin discussing the Spider-Man trilogy I’d like to talk about a favorite game of mine. I am currently playing with Spider-Man: Shattered Dimensions and I hope to finish it by the end of summer (I only get to play once a week because the console is over at my brother’s). So that review will come up during DC weeks, anyway let’s talk about: 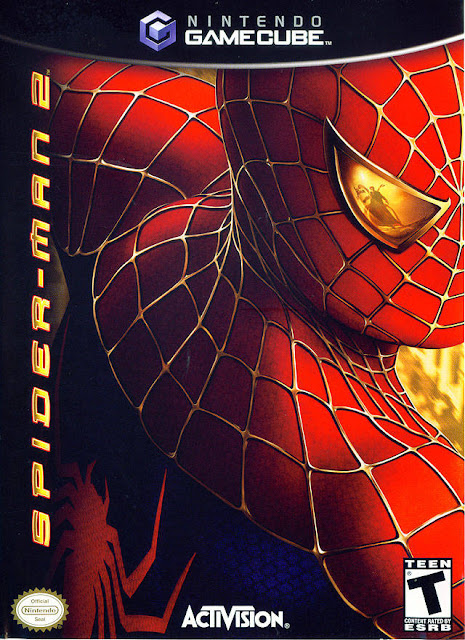 After the hit that was Spider-Man 2, with him battleling Dr. Octavius - a game based on the movie came out of course. Just like based on almost every movie made after 2000… but this game was great! If you have read my (Games) X-Men Origins: Wolverine review you will know that that too is based on the movie, except it was pumped up with general enemies of Wolverine to make the game more entertaining, and of course lasts longer. Same thing happened here. For those who already knew Spider-Man, the story stands perfectly on its own, however it also pays homage to the movie. Another awesome feature of the game was that at the end of many levels you could unlock entire scenes from the movie. Seeing that the game came out before the movie, my brother and I were super excited. At that time we divided our forces, I played through the missions, he got the boss fights and we watched the unlocked scenes together. It was awesome!

The story: Peter is living in New York, working for the Daily Bugle while studying at the university. However the game never shows us Spidey without his mask. Basically you have to complete every mission and afterwards just play to get the highest score possible. Of course, you have to fight Dr. Octavius in the end and you have to save Mary Jane.
The levels: You have a little map on the right bottom corner of your screen which shows you locations where you might encounter thugs and criminals waiting to be taken down. Basically, if you follow the map, along with the missions given to you, you will get to the next level pretty soon. During completion of your missions you are awarded with hero points which you can spend to make yourself stronger, to try out new ways of combat and so on. The last mission consists on you getting over 50,000 hero points and upgrade to Swing Speed Level 8, just an example. Also during the game other little missions encounter you, for example there are children who lose their ballons which you can get back to them and so on. It is filled with little surprises, there are  even comic book stores! During the game you can also collect a special kind of spider coin, which are either in plain sight or hidden, if I remember correctly there were about 100 you could collect, I got as far as 80, since they are distributed all over the isle of Manhattan and up to this day I hadn’t replayed the game because I was set on finding all of them, but no luck so far. In the left upper corner you have you life line and a bar that measures your spider-strenght. You can only you so much extra combos. But there are a a couple of easy combos that are also very strong. From a point on defeating thugs is just like a piece of cake, however
The mini-bosses: just like every good boss, they can be defeated only one way. But figuring out which way: that is awfully hard! Take Rhino for example, to defeat him you need to hang him upside down from a lamp post and beat him like a pinada. This is all well, but until you figure out which of the three web combos you need and how to get him close enough to a lamp post and then re-do this whole charade about five times, you pretty much get killed. I died like ten times. Of course it is part of the challenge, but you get my objections.
The boss battle: everytime you encounter Octavius you have to beat him the same way, but this fight is just a little faster. Dodge his attacks, web his arms, and then attack him. Take this slow, or you'll probably loose. Use your Spidey Reflexes. Thankfully if you die, you'll be brought back with full life, you don’t need to restart from another mission. I can’t recall how many times I had to retry, it might even be that it was my brother who finished him in the end, I really don’t remember. But it was hard!
I honestly played it such a long time ago, I cannot recall if there was anything bad with it. Spidey died a lot, that I remember, but at that time I didn’t really pay attention in upgrading him, which was a rookie mistake on my part, if I played it today, I’d probably be more careful.
Above all I loved that even though the game wasn't through Spidey's eyes still when he was swinging, you pretty much felt like you were swinging along with him. And after reading all those comics and seeing the movies, isn't that what we all really want? When I feel down I just pop in the disc and swing around for a bit, it's a real relaxer! 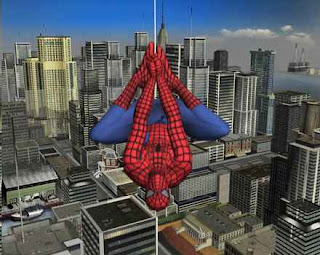 The best thing about the game is that it sticks to reality. While Wolverine would require planty more time to heal (even with his healing factor!), he does it pretty fast in the game. To give you an example, when Spidey is in central park, he can’t really swing around, since the trees aren’t high enough. Or when you get to the top of the Empire State Building: when you jumped down, you need to get to the proper hight to be able to hang onto buildings with you web, because around it the other buildings are quite little. Another thing I dug is that during your play the hours change, you play at night as well as during the day; and you encounter more thugs during the night of course. I loved to climb the Empire State Building and then watch the sunrise from there! It was immensily cool.

Writing this I decided to replay the game. I am sure that it is still available out there, if I got you interested I think you should look for a copy on amazon for example, I’m sure that there are still plenty available. My version is for the GameCube (one of my favorite consoles), and I ain’t giving it up :D ! But if you get a chance and you do like comic or movie based games, this one is a definite winner!

PS: After finishing one mission I was supposed to call my brother so we could see the unlocked scene together and I meant to pause the game, but instead I skipped it and up until today I wasn't able to tell him, nor do I know what that scene was... I am sorry! XD
Bejegyezte: CsorEsz91 dátum: 12:27 AM