What's next on my list? (Games) X-Men Origins: Wolverine

Let us finish the X-Men series. Seeing that I haven't grown up with the TV animation series and I do not like the new 'post-apocalyptic' Japanese version... it's just f***ing depressing and dark. I hate every movie-series that is set after the apocalypse. It might be that I do no believe in the apocalypse, but mostly I find that life after it won't necessarily be so incredibly... awful. We built our society from scratch, why couldn't we do that again? Anyway, let us move back to the game. 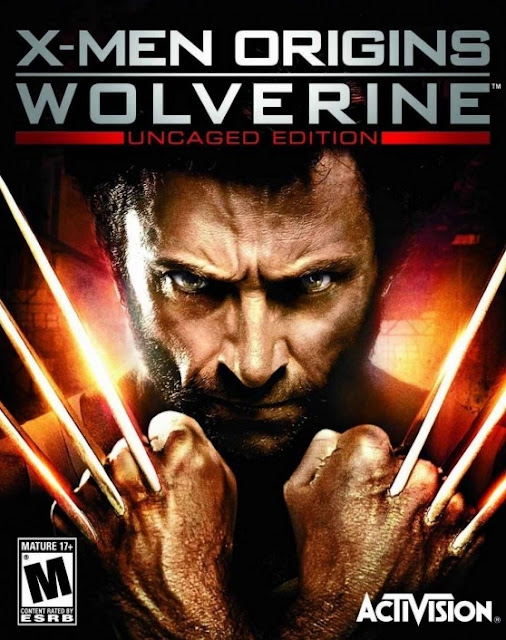 If you have been to my blog lately you might have seen that I just reviewed that movie version of the game: Why Should You Enjoy X-Men Origins: Wolverine In Spite Of Public Opinion. Now, I liked the movie and to top it off I find the game to be fantastic.
The story briefly is mostly the same, but it is filled up with a couple of comic-crowd-pleasing moments. For example Wolverine fights Sentinels, which is awesome!
Logan is in the future and he tells us his story, which he can't remember, but we need to know it. In the present day he is looking for his brother Viktor and while doing so he flashes back to their last mission in Africa, after which their roads parted.

The story: well it tries to be as accurate as it can to the movie, after all, it was made for it. But, as I said, it is filled with a couple more things: there is Mystique in it, the Sentinels, other mutants and scientists, after all, people do (or should) work for Stryker! As I said in my movie review, I liked the story and I felt like it's minor inconveniences were fixed this way.
The levels: Logan levels up while gaining experience from defeating (=killing) everybody. Of course the higher you get, the more points you'll need. You can get extra points by collecting the dog tags of some dead soldiers hidden in various corners of the levels. Actually, finding these soldiers was one of the things that excited me the most. Also, the higher the levels, the longer the life and rage line of Logan will be.

The mini-bosses: the easiest was probably to beat the mini-bosses before you encounter the Sentinels. Afterwards everything is damn hard. You get skills points which you spend to give Logan skills, obviously, and one is cooler than the other. Once you figure out what hurts them the most, beating them is quite easy.
The boss battle: your biggest enemy is Dead Pool, Wade Williams, now defeating him was incredibly hard. The technique is easy once you figure it out, however two problems were re-surfacing: Dead Pool's life line was re-charging way faster than Logan's, which meant if you spent too much time apart from him, he would get back all the power lost - but at the same time your rage bar doesn't get loaded up and defeating him with only blade cuts is literally impossible! Second problem was that there were a couple of glitches and if Logan fell off by accident, the same thing would happen as if he were knocked off: you would have to restart the level. In the second case, you are mad, but it were bound to happen, in the first time it's just f***ing infuriating that you have to restart when you are SO DAMN CLOSE because of a stupid glitch. So after the 13th time I finally got to defeat him and it felt GREAT!! So all that waiting and suffering actually paid off in the end.
Bonus: during the game you get to collect little statues of Wolverine's old costume known in the comics. If you fight yourself in the bonus levels you get to use the costumes during the actual story. That is pretty cool, because Wolverine's original costume is stronger than his tank top: I defeated Dead Pool with that costume.

What didn't work? The animation was wonderful on Logan and Viktor, because they were the only ones voiced by the actual actors, but that was no reason to make the others looked like hybrid humans with bulimia... Also there were a couple of scenes were Logan's arms were bigger than his head... that was a bit disproportional.

What worked? Logan did. All my life dreaming about being him, and playing this game I finally felt like being him. His blades cutting off arms and heads, ripping through kevlars and guns. Jumping like a fierce animal, having his senses, watching his body recuperate from being torn to pieces. It was truly wonderful. This is a game worth playing. It isn't very challenging, because his life bar fills up pretty quickly, it took me about 24 hours to finish, but if you don't want to stop and restart the level just cut s**t up, then you are in for a treat!

This game is truly awesome. It has been released for almost every console, make sure to check it out!
Bejegyezte: CsorEsz91 dátum: 8:47 PM