So here comes our last chapter before the wonderful beginning of Comics Summer. Yesterday I saw a little movie called:

Oh boy, how people hated this one! Actually I have found very opposite opinions when reading the imdb comments. They either claim to have seen one of the best movies of all time or one of the worst ones. The best comment however comes from a reasonable person who claims the following: there is a book. It is nothing like the book and as time passes it will be less like the book. That doesn't change that people’s opinion on why the movies suck usually involve things like "they don’t use the muskets enough”; and let us be honest, that is plainly dumb. Just because we call them musketeers? They are guards, more precisely bodyguards and actually they do use the muskets quite a lot! But, let us discuss this version.

Athos, Porthos and Aramis travel to Venice to retrieve plans for France, but they are betrayed by Milady who sells them to Lord Buckingham. A year later they aren’t in the best of shape and they encounter D’Artagnan who already had an encounter with Rochefort. D’Artagnan manages to piss off all three and they all prepare to duel him when the Cardinal Richelieu’s guards arrive. The four become friends. However the Cardinal plans to implicate Queen Anne and Lord Buckingham, so King Louis XIII of France will declare war on England. The Queen’s lady in waiting Constance hires the Three Musketeers to stop Milady from finishing her plan. Milady kills herself, D’Artagnan kills Rochefort and the Musketeers, instead of revealing Richelieu’s plans to the King, they only let him know that they know. In the end we find out that they have angered the Lord Buckingham and he is on his way to attack France. Also he happened to fish out Milady from the channel. They were probably hoping for a sequel.

To be completely honest with you I loved this movie, although I see its faults. The reason why I wanted to see this is Matthew Macfadyen, Athos. I am literally in love with this man and his got a voice that makes chills run up and down your skin. His got charisma that not many share! And to be honest, he did not disappoint! What else? Orlando Bloom. Dear God, this man is a god! I didn’t care for him as Legolas, to be honest, I didn’t find him particularly talented. I then saw him in New York I Love You, where he had by far the most interesting storyline, and in the end in Main Street which was an UTTER PIECE OF SHIT!!! (To read my review, click here!). He was a very good villain and with any luck he will play more in the future and I shall look forward to it! What else? Luke Evans was a wonderful Aramis and Ray Stevenson an exceptional Porthos. Mostly these three had great chemistry together and I enjoyed their every scene.

Or, should I rephrase it, what other people didn’t like: Milla Jovovich. When we saw the movie my sister asked me "Did her husband direct this? He is usually the only one who casts him.". And as sad as that may sound, he actually did direct it (Paul W.S. Anderson). Many comments come to talk about the fact that if perhaps zombies where in it, her role would’ve been far more justified. They were referring to the fact that she resembled more of a Bond Girl, instead of a graceful Lady. However I didn’t mind. The whole movie is set up to be a big spy movie and in an age and day where costume movies and new versions of Sherlock Homes have such a high fan base and so many followers you’d have a hard time understanding why people didn’t like this one. Not to mention that although people have criticized Jovovich’s accents and acting, she got me. I have believed that she was driven between money and love, however she did love Athos. I did find her beautiful and I think it was interesting how she has proved to be a very good spy. In other versions I find that we never get to find out why everyone wants her on their side. So all in all, I see that it was a bit far fetched, but I liked her.

What my biggest problem was however is King Louis XIII of France. He was a total wuss and he appeared to be gay. And that is me putting it litely. Consider a woman who is trying to impersonate a man, but without trying to act like a man. If you could give grades on gayness, he would get an A+… +++++++! Always! And that wasn’t the biggest problem of them all. We all know that he is young and he got the throne way early, but in this movie he is simply dumb! Stupid! Being young doesn’t necessarily imply that you are an idiot! Quite the contrary, younger you are, more curious you are. But this King wasn’t curious at all. In other versions Richelieu has a reason to want to assassinate the King, he always gets in the way! He doesn’t here! He couldn’t care less about France or the war or literally anything that Richelieu wants! He cares for appearance, fashion and his wife. The conflict is none existing! 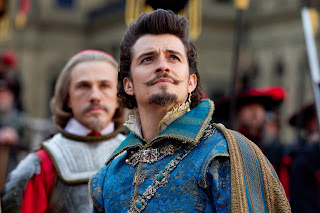 Not to mention D’Artagnan. Dear God he was bad! The long hair? Awful choice. He wasn’t convincing; he wasn’t charismatic and in the long run he didn’t even prove to be such a good musket. He had too few scenes and in those he didn’t convince me. His best fighting scenes were the ones he shared with the Three Musketeers. The fact that he defeated Rochefort was a mere luck. And in the end the problem with him was the same I had with the King: too young. And they were not acting according to the age they were supposed to portray. D’Artagnan was too smart for his age, not to mention too talented. Think of Chris O’Donnell: he looked young and foolish, but he was also smart for his age and he obviously spent more on his training than one would immediately assume. Unfortunately I couldn’t say the same about the 2011 version. And his relationship with Constance was a huge Hollywood cliché, and not even a good one at that!
Lastly, the biggest pain of all was a little character called Planchet. He was the servant of the Musketeers and he was the comic relief guy. Except he wasn’t comical… and there was no relief caused by his scenes! It was predictable, he said birds would shit on him, guess what? They did. He is fat, will he steal food? Oh wait, he did! It wasn’t funny, it wasn’t necessary and honestly it had bad timing. 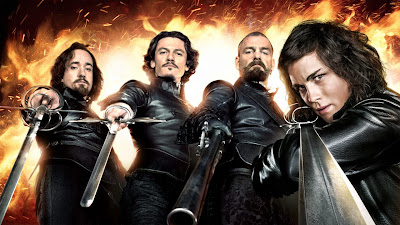 Biggest problem: we know that they are friends; we know that Athos is destroyed by love; we know that the King and Queen feel mutual affection, however they fear that the other doesn’t feel the same. Therefore what does the movie do? Avoid these very important plot points. Seeing that you are supposed to know them, you are supposed to enjoy the movie just the same. Only you cannot, because these are the basic story lines that define the characters and their actions. Someone who hasn’t read the books, nor has seen any previous movies, will be unable to understand the characters real emotions and their actions. So movie, if one day a sequel will be made, I hope you will work on this. I also want a SEQUEL!! MORE MATTHEW AND MORE ORLANDO PLEASE!!!

Yes, I can see why people didn’t like it. I also see why others would. I liked it because the actors were good. The story I think is enjoyable, it needs work mostly because there were a few gaps, but it was entertaining. The graphics and scenery wonderful, I mean, the palace of Versailles? Gorgeous! I think it was totally worth my time (both times I’ve seen it yesterday). And I can’t wait to see it again. You’ll probably be thorn the same way the others were: you’ll either love it or hate it. Anyway, trust me, you want to make up your mind on your own!