Have you ever been to the theater and you see a really good trailer and you have to ask yourself, what is this? I want more, oh my the actors, I want more! Where can I get more? In my case one of these was: 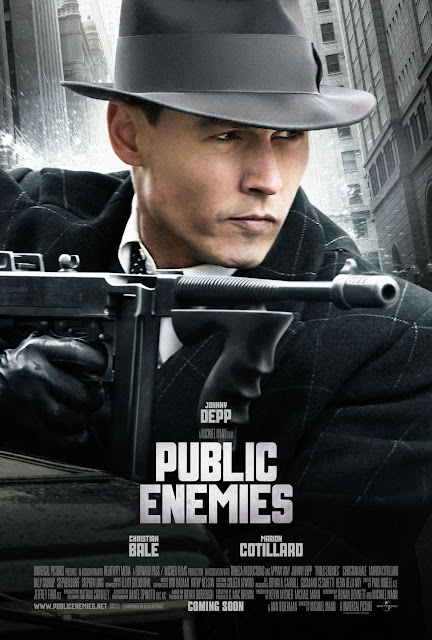 However, trailers lie. Dear God, how bad this was... imdb gave it a 7.0 rating, let me tell you, that's bull shit! But let us dive into it right away.
According to the summary: "The Feds try to take down notorious American gangsters John Dillinger, Baby Face Nelson and Pretty Boy Floyd during a booming crime wave in the 1930s." OK, first mistake, spoiler coming up, Pretty Boy Floyd dies in the first ten minutes. I am not even kidding with you, Channing Tatum fans, you are allowed to skip this one! Second problem, I couldn't even tell you who the hell Baby Face Nelson was, that is how much I didn't care about the movie, while watching it! 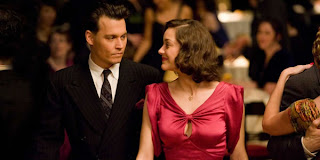 OK, so the story is more focused on Dillinger alone. He meets a girl one night, Billie Frechette  and the two fall in love. Unfortunately the police, Melvin Purvis, uses her to get to him. It is quite ironic but in the end it isn't her who leads them to him. But Dillinger is portrayed as the good guy, or at least the movie tries to do that, but fails horribly at it. Nowhere does the concept of robbing banks with guns is portrayed in a fashionable or fancy way. I am not sure if the movie wanted to stay impartial, or if the movie chose a side. Mainly because the love story would draw the viewer onto Dillinger's part, but then you are reminded of the bank robbery and you think, yeah... maybe the police is better. And then you see a horrible performance by Christian Bale and you decide that you'd rather see a movie with Marion Cotillard alone, preferably without any of these guys! Or stories... Of course I cannot object Johnny Depp's performance, he is Johnny Depp after all. He waswonderful, as always, but in the long run he did not save this movie for me. 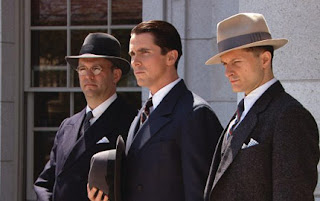 Alright, besides bad performances the biggest problem was the music. Or at least it would've been, IF THERE WAS ANY IN IT!! WHERE IS THE MUSIC?? There was one seen in particular where the bad guys and the police had a showdown in the forest in the middle of the night... do you know what happens there? I sure as hell didn't! Everything is black, literally, and every 10 seconds somebody started shooting. Now, this darkness would make me fall asleep, but the repetitive gun shots just startled me every single time. And music is generally used to keep the viewer alert, interested, curious even. Now imagine the most boring thing you could ever watch. And I mean the most boring thing. This scene is worse than that. And this wasn't the only scene like this, every action scene is a funeral over here... Remember the lyrics from Depeche Mode "Words like violence, break the silence"? Well not in this movie they don't! Anyway, there are a couple of songs and very touching scenes in it, but it is over two hours long and the good scenes alone would've made it into a 45 minute beautiful short. 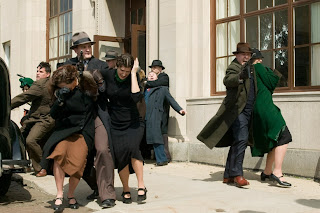 Let me just point out other things that I didn't understand. Purvis is sent after Dillinger and he proves to be a very good detective. He gets Dillinger several times, but he always escapes. How? I mean really, don't you find that perhaps in this special case putting a couple of more agents on him would prove to be beneficial? Also, when Billie is apprehended an officer beats her to get the information on Dillinger's whereabouts. Purvis gets mad, because he would never hit a woman (or at least I think that is the reason). Pretty much all the initial anger he had to get Dillinger feels like is totally lost in the wind by the time he gets around the only person who might help him. Throughout the story many of Dillinger's accomplices die, but there are some that simply got lost during the movie and I have no idea where they have gone. It probably wasn't important, but there is an initial scene where Dillinger breaks out his mates from prison and his mates are scattered everywhere by the end of the movie. Should we care? Does anybody really? Perhaps the writer should've... 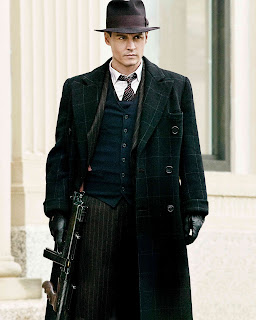 And lastly the scene that drove me crazy: Dillinger takes his friend to the police station and he goes in. He waltzes around the special operations room prepared to apprehend and arrest him. He sees his mugshot, that of his friends, locations, maps, everything the police ever dug up on him. He then asks a couple of cops in the corner watching TV the score of the game they are seeing. One of them looks at him and nothing. There is a secretary in the background typing, a guy at a table next to him and... nothing. Nada. Niente, NOBODY NOTICES HIM!!! Are you kidding me? Is this like a teaser or something, why doesn't anybody see him? Where exactly are those 300 cops that were in there a couple of hours ago? But most importantly, seeing all the documents Dillinger should've noticed that he was being set up by his friends and that therefore you'd think he wouldn't be stupid enough to go to the one place where he knows they are going to catch him! Or if he didn't know, what was the point of that scene? Did he want to get caught? There is something implied about the fact that without Billie his life isn't important, which is all well, but should we immediately assume that he wished to be caught? Moreover shot in the head? I don't know. This movie is stupid.
I understand that it is a fascinating story, but perhaps you should've told it in a way that keeps people interested. Secondly, the idea of approaching every side of it, including the boring ones, was a fatal mistake. At the end there are a couple of sentences on what happened to the real people portrayed in the movie and it says that Melvin Purvis took his own life with a gun after the proceedings. I would've comprehended his pain better if Bale didn't look like he was constipating through the whole movie... just saying....

General idea? Don't watch it. If you are a Depp, Bale or Cotillard fan, trust me there are plenty of better movies out there. This isn't one of them.

PS: Diana Krall was in this? Where? Seriously, where?!