FRESH FROM THE THEATRE: The Iron Lady

You might have noticed that I rarely write about movies that our still playing in your local box offices, the reason for that is that I find the price of the tickets to be unreasonably high! Also, I don't really have any money for it... However for my mom's birthday we went and saw: 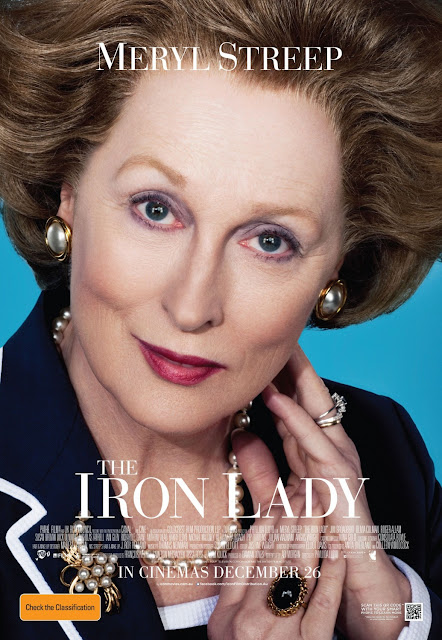 I wanted to talk about this movie because I received controversial opinions. Also, my brother didn't like it and I did, so I really want to stick to him! I am a nice sister like that. In case you didn't know, this movie is about the life of Margaret Thatcher, the only woman Prime Minister of the Britain. 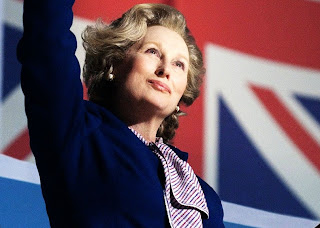 The biggest problem he encountered is that Margaret seems to go crazy. Actually the movie is set in real time with Margaret remembering things from her past: her dad's speech that made her get involved in politics; her husband's marriage proposal; her campaign; the tough decisions she made and so on. She keeps hallucinating that she is talking to her dead husband. People told me that they didn't like that she was seeing her husband. That it made her in fact look crazy. I did not find that to be the case at all. I find that she was grieving and that is how she dealt with it. Secondly I was told that we don't really find out anything about her political actions. That may be the case, but for those who lived through it know already and now they have a perception of what she went through. Then those who didn't, well, all I got to say is that it made me curious. I want to read Thatcher's book, I want to learn more about this. I was given a picture that is not complete and I have a chance to either be pissed at it for that or complete it myself. I've chosen the latest. Also, for not being a documentary, it sure as hell gave as a lot of original footage. You can really sense why people hated her and then came to the conclusion that perhaps they should have trusted her. 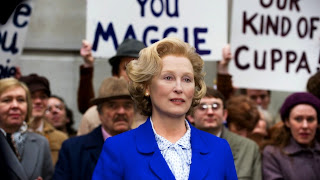 I was touched by how she fought her way up to the top. She didn't come from money, she wasn't interested in being a housewife, however the movie shows us that she was a mother above all. There is a scene where she writes to the families of all the soldiers who lost their lives in the fight to get back the Falkland Isles. Saying, that herself being the only prime minister who is also a mother, she assures them that no death is in vain!
During the movie, if you've seen it, you think about The Queen, the movie that portrays how the Monarchy went through Diana's death. If something happens to us because of somebody else, we just blame them, we don't really think about it twice. Especially if that someone is a politician. Of course I don't want to defend all politicians (because they don't really deserve it), but there are exceptions. Her, by the portrayal of the movie, being one of them. And not just by the movie, think about it! She was the first woman Prime Minister, and the longest serving one too (11 years, closest to her is Tony Blair with 10 years), I believe there is a reason for that. And all right, I am not British, I really have no say in the matter, I didn't go through what they did. And yet this story fascinates me. 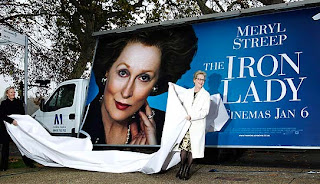 Here I'd like a chance to mention the director of the movie Phyllida Llyod. She happens to be a theatre director, she is only responsible for three movies: Gloriana, Mamma Mia! and The Iron Lady. Need to admit that I never saw her first movie, however I can see how far she's come from the second one. Being also the director of the stage musical of Mamma Mia! she of course landed the job for the movie, where her role really was being able to fit all from the stage onto the screen. But this movie was completely different, with some scenes and frames that completely astonished me. She did a really good job. 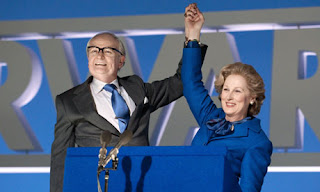 I was set on seeing this movie anyway, but when Meryl Streep won the Oscar for it, I knew I couldn't wait any longer. Ever since the first news came that she would play Thatcher in a movie about her, I have been so excited, you cannot imagine! I have been following Streep's work ever since the summer of 2008, when I was waiting for Mamma Mia! to come out. I have practically seen all of her films now and although I am always sad when she doesn't get an Oscar, I can firmly say why she deserved this one in confront of the others. All through the movie you literally forget that this is not Thatcher. My biggest problem with George Clooney and Brad Pitt is that I really don't give a shit about their movies because they as actors don't give me anything new. I see them in the same movie all over again and while I do, I cannot stop thinking that 'that is Brad, it's not whoever he is trying to portray'. But think about Doubt, or Julie&Julia or Silkwood! Meryl, as Colin Firth said in his speech at the Oscar's really takes it to a whole other level, making it for others harder each time.

"What people don't realize it that being nominated so many times, means that I lost just as many times as well." - Meryl Streep


Anyway, I suggest you check this one out. I am sure that it'll get you interested in some British history and the more people I get to like it, the more pissed by brother will be, so HELP ME! :D

Until the next item on my list, which is going to be In Time with Justin Timberlake and Amanda Seyfried! So don't lose touch, see you in a week or so!