Well, since I have no money to go to the theatre (trust me, the economic situation is not getting any better any time soon!), we shall go through a couple of recent DVD and/or Blu-Ray releases of the last couple of months. Next up is Real Steel. 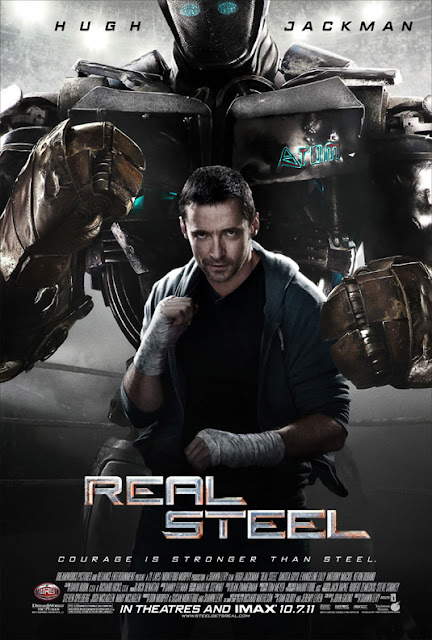 This movie might not be the best work of Hugh Jackman, but I need to give credit for the story. Why? Let’s dig in, shall we?

The story is set in the near future where boxers have been substituted by robots. Charlie Kenton, an ex-boxer who, to make any kind of living has been boxing with his robots, finds himself in a bit of an economic crisis. He owes everybody money, and he keeps loosing his fights. One morning the news comes that his ex-girlfriend has passed away, leaving him an 11 year old boy, Max. Charlie has no intention of becoming a father, but seeing that Max’s aunt’s boyfriend Marvin is quite rich, he negotiates the paternity rights of Max for some cash. The deal in the end is the following: Charlie gets the money if he looks over Max for the summer. Charlie of course tries to leave him behind with an old friend, Bailey, but Max won’t hear about it. They get a new robot and try to earn some cash. Charlie’s new robot is destroyed immeadiately, while Max finds an old working robot in a junkyard. He cleans him up, gets to know him and the three start to take part in new fights, earning more and more money. They are called up to the big league where Atom, the robot, challenges the world champion Zeus. Charlie trains the robot and he and Max get close. In the end they can’t defeat Zeus, because at the end of the rounds the ’bad guys’ pay the judges whom conclude that Zeus is still undefeated while Atom becomes the people’s champion. 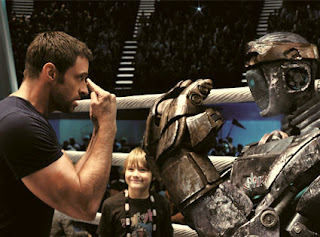 What is good about the story?
The movie, thankfully avoids the obvious clichés, such as “The boy finds out his father was payed, so he hates him just to forgive him before the end of the movie.” In this movie Max knew all along that Charlie was paid and he couldn’t care less. He is in it for the adventure. The second is that unlike every movie that is about the “not father material” becoming a good father, this really puts to perspective that Charlie is not a good guy. He lives in his trailer, he takes part in illegal fights, he has never been a father! He acknowledges that Max being with his aunt is the best for him. Of course they bond and they become friends, but that won’t make him a good father! Boxing is the thing they have in common. Every fight they have will be together, but Max still needs an actual bed and school, which his aunt provides. The third point is that I like the story. I find boxing to be the most stupid sport ever invented. People bashing their heads in for entertainment? It’s pure idiocracy. All your brain cells get splattered, what’s the point? On the other hand, if the purpose of this sport is to entertain people, then doing with robots is the sensible thing! It’s just chunks of metals bashing electric circuits. Of course, after a while we would probably get attached to them, the same way we do with puppies or our phones, but still, we wouldn’t associate them with feelings.

Unlike a tree a chunk of metal doesn’t have feelings and never will. Also this isn’t like I, Robot where we insist that robots need feelings and such. The whole idea is approached as if we were playing with a video game with remotes only, instead of using a 3D screen, all of it is actually perceptible. I find it wonderful! And one might argue that that would send boxers into retirement. But in the movie Charlie is an old boxer as well, and guess what, he is coaching now. And I am not saying that you still can’t work out with a punching back every once in a while, I just don’t see the point in hitting someone continuously! 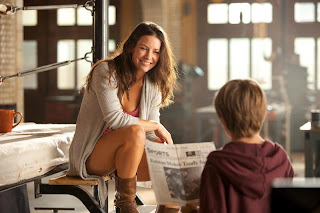 What didn’t work?
Unfortunately the movie lays down some pretty big plot holes that are never answered. We are given hints that the inventor of the robot Zeus are in some pretty deep shit and are paying off robots to lose fights... or something, that is the conclusion I came to, it wasn’t really explained. Also they are never brought to justice. Back in the old days every movie had a competition at the end in which you knew the protagonist had to win in order for the story arc to be complete (think of The Karate Kid or Over the Top and so on). Then this took a turn in the 21st century movies and it didn’t become about winning but getting the respect (which is a bunch of bullshit if you ask me), they thought they could keep us worried if we weren’t sure again if whether or not the main character would win, but to me it just makes it boring, because we know he/she WON'T! So again, we don’t win, the disgustingness of the athletes life painted with dirty money is never brought to life and to end with it, Atom never gets the credit he actually deserves.

Second point is that Max finds this robot that, besides not being in fashion anymore, has nothing wrong with it. And it was never quite clear why would someone throw out a perfectly good robot! They bring him back to Bailey, who is a sort of robot mechanic, who says that there is nothing wrong with it. Perfect, still, why was it thrown out? Also it has a ‘shadow’ function, meaning that it can copy whatever its owner does, and that looks like a pretty awesome feature! Yet, the why and where this robot came from are never addressed! Thirdly Bailey is the love interest, however we are never really clear on why she and Charlie aren’t together, nor why should they now be together. And speaking of, she is supposed to be this awesome mechanic, but she just keeps bitching about what she cannot do with the parts Charlie brings her instead of actually doing something. She is basically a reminder of Charlie’s past as a boxer, and an eye that knows him better than anything, but in the end it doesn’t serve as useful information. Of course she bonds with Max and tells him stories but still, her character was not needed at all. 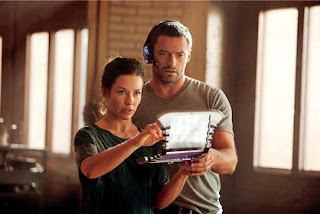 Lastly, the dialogue is, well, stupid. Everyone, except for Charlie, keeps beginning and ending the sentence with someone’s name “Damn it Charlie!”, “Why did you do this Charlie?”, “Where is Max?”, “Did Marvin give the money?”, “Zeus accepted the fight.” and so on. People in normal conversation don’t repeat the name of someone they are talking to, at least not that often! It just seemed out of place and stupid. In certain points it just seemed that they are trying to make the scene longer just by emphasizing on the characters’ names.

You see, this movie has some faults, however the 7.2 rating on imdb.com might be a bit much for me. It is certainly a brighter and smarter picture of the future, in contrast with all the bad and dark examples we’ve seen so far on the big screen. However, that doesn’t change the fact that a good idea can be lost if attention isn’t paid to detail. But, if you are a Hugh Jackman fan, you should definitely check this one out!
Until the next item on my list!