Let us now look at a remake and the movie from which it originates: 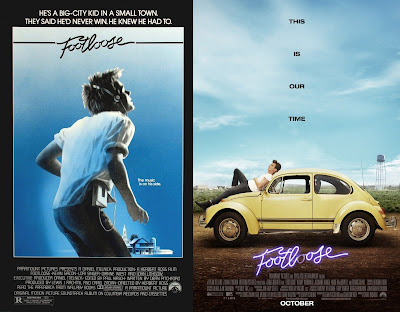 Ren McCormack moves to a southern town by the name of Bomont with his mom. Unfortunately tragedy struck in this town a couple of years ago, and five teenagers where killed in car accident while heading home from a party. In order to avoid future incidents, the town council has banned loud music and public dancing without parental supervision. Here, he makes friends with a guy called Willard and another called Woody and starts to fall for a girl who has trouble written all over her: Ariel Moore, the daughter of the town's Reverend. Unfortunately Ariel is already taken by a first class category a-hole by the name of Chuck. 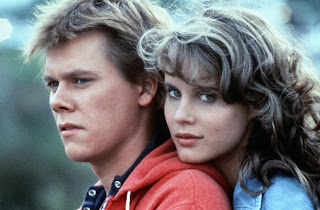 No matter what, Ren always runs into trouble. Chuck's friend wants to sell him weed and he gets caught, he has to work to help out at home, Ariel is beaten by Chuck and he is blamed for it, he listens loudly to music and gets a police notice and so on. However he is the good guy and tries to battle the council to allow the senior class at Bomont High to have a senior prom, they don't succeed, however his boss lends them the warehouse well he works, which is just outside Bomont so the law doesn't apply there. They danced all night.


What makes the 2011 version different? 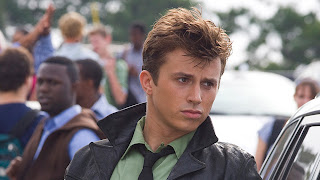 Events occur in real time, we are in 2011. First of all we open with kids dancing at a party and then dying in an accident, therefore the weight of such a tragedy is pushed upon the viewers from the very beginning. We also get to see when the new laws have effect.
Ren here has to move to Bomont because his mother died of cancer, and his only relatives live here.
In the original version, because it is played in the 80's, the Reverend has an actual fight with his instincts, being a father and being a role model for the citizens. He is asked to judge books that supposedly came from Satan; he has an influential post in the city council, and one of the teenagers killed in that accident was his son, so he is overprotective of Ariel. At a certain point in the movie his wife stands up against him, seeing that he can't understand the bigger picture, being stuck in the past. While in the new version, the conflict is only around him being a father, his character never really develops from one point to the other. In the original he is worried, but understands what is best for his daughter, in the remake he never really seems to come around. It gives you the feeling that they cast Dennis Quaid to bring in fans, but never really wanted him to have any lines... And with that, his wife also has an arc, where at first she stands behind her husband but understands, that he needs a wake up call. In the remake, the dear Andy McDowell* doesn't do anything and at the last minute she stands up to him, for no reason at all. It only gives you the feeling that she wanted to piss him off!

Also, my favorite point, is that from 95' and so on, it became somewhat obligatory that there needs to be somebody of black color in the cast (of every movie and every TV series), therefore here we have Ren's friend, Woody, an african-american football player who, guess what? Only dances hip-hop. Because a dance movie can't go without that stupid R&B, can it? Either way, at least they didn't push it down our throats, like every other dance movie.
And in this one Ariel is a real rebel. You never question why she hangs out with Chuck, why she keeps getting herself into danger, probably because in the beginning we could see what damage the death of her brother caused in her.

*Andy McDowell, DO SOMETHING!! You are more than a L'Oreal commercial!


What did work for me? 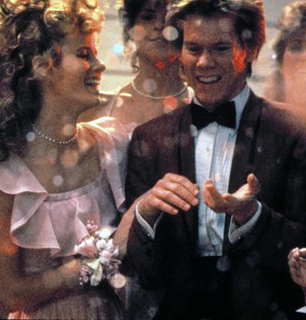 First off all, in the second version, because of his mother's death, fro Ren this drive to finally accomplish something, to feel a bit of victory is more understandable. Also, he has a relationship with his uncle, who defends him even when all the accusations point toward him. There is also a scene, where Ren is pissed off and goes to the warehouse and dances off his anger, here I've found his reason for being pissed closer to my understanding, also in the original Ariel just shows up at the warehouse, which was odd... while in the remake we are given hints that she is likely to follow him, because she sees him rushing off upset.
And I liked the actors in this a lot more (although, LOL young Sarah Jessica Parker :P). There are no words to define how much I love Kevin Bacon, but no matter how young he was, in the first version you don't feel like any of these people are really in high school, while in the remake you do feel the parents' responsibility to defend these kids, because they are kids! I was also glad that for Ariel's part they have cast a girl who is actually a dancer (and turned out to be an awesome actress as well!), so she actually does DO something in the movie. And I enjoyed that they reused some of the songs that are typically known from this movie! (For example: Bonnie Tyler - I Need a Hero; Deniece Williams - Lets Hear It for the Boy) And as horrible as that may sound, when Chuck hits Ariel, she really pisses him off, while in the original he hits her twice, once for no apparent reason. I'm not saying that being mad justifies his action, not at all, but if I were in his shoes, that would've probably been a normal reaction to Ariel's actions. 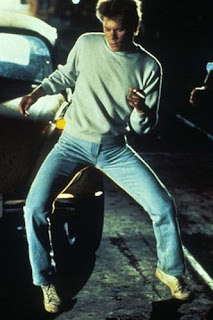 Mostly, besides the story arc of Reverend Moore and his wife, the biggest problem for me was the music. It didn't fit. For example the warehouse dance? (to see the scene from the movie, scroll down!) When you watch the original, you have goose bumps all over your skin, you are taken by the music, but in the remake, I basically just yawned. There is something magical for me in almost every song from the 80's, but there are still some excellent songs that would've fit in there! (Except the one they used...). And if you consider that this is a dance movie, then there really should've put more effort into choosing the songs.
And on a final note, nothing more was really added to the script. The dialogue is the same, the pictures, images, colors. They took out character development and added like a 100 layers of pain and sadness, which would've worked if the character development wouldn't have been removed.

So, what was the point of the remake? ABSOLUTELY NOTHING!
Do check out the warehouse scene, it makes the movie worth watching!

A very wise reviewer, by the name of Spoony said in one of his reviews that he prefers re-releases to the cinema instead of remakes. And I completely agree with him. It is really a waste of money if you think about it. I understand that many youngsters won't pay money to see and old movie (while trust me, many would!), but if your intention is to make the same damn movie with different actors, than make the same damn movie! Do not add or take anything away from it! It might be very hard to explain a story that really makes no sense in today's society the way it did 30 some years ago, but hey, give it a try! However, if you want to make a different movie with similarities, couple of changes here and there, then don't, please don't use the same goddamn dialogue as the first one! BE CREATIVE FOR GOD'S SAKES!!

Otherwise pay those couple of dollars for the rights, re-release it to the cinema (like they are doing now with every movie, but in very cheap and lame 3D), and cash in all you get. Fans will surely watch it, and perhaps some, who rather go to the theatre than rent a DVD might go as well. Couldn't hurt to try!