The West Wing and my political "view" of the US

To start off with, let me wish everybody a Very Happy New Year, let it be prosperous and joyful!

That said, let us start off with a whole new review: The West Wing. 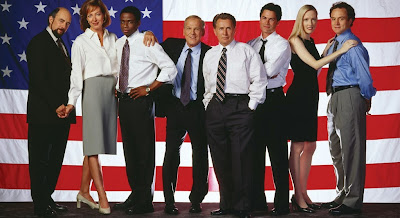 I remember the first time I saw this TV series. It was back in 2000 and on a very late night a Hungarian TV station aired the very first episode. I wasn't really interested in it, but the fact that my sister was made me curious too. We stayed up late to watch it and the first thing we noticed was a lot, and I mean a lot of walking. The set and offices seemed huge. But by the time you're watching a marathon of the third season, you realize what exactly the set looks like and they aren't really advancing, only making circles. It looked like a very grown up show for a 9 year old (it was), and even if they spoke Hungarian, I still couldn't understand it. 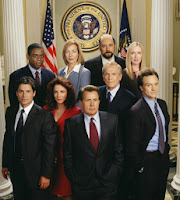 Seven years passed when on a site I saw the advertisements for the final episode, Tomorrow,and it got me curious. By then I had seen several random episodes, I knew the characters very well and I was curious about the last episode, so I downloaded it. While I watched it, I remember thinking "What the hell is going on?". This only raised more questions in me and made me even more curious. My brother had bought himself the first season on DVD, so I decided to pop it in and see for myself what exactly had happened these past seven years. (That, and I am a hardcore Stockard Channing fan and I try to see everything that she is in. Even if she wasn't in every single episode, it made no sense to skip on or three just because she is not in it, therefore I saw every episode.)

There is really no point in me telling you what happens season for season. It would take up all of my free time and you would get bored reading. Let us recap in one sentence what the story is really about, and then discuss it thoroughly. We witness the life of President Josiah 'Jed' Bartlet from his second year in office up to his 8th and we get to know his staffers and the extreme difficulty they live with to be able to dissociate their work life from that of their social life. 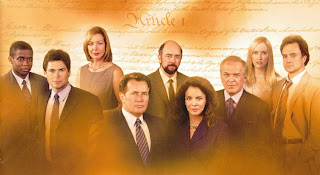 This series has taught me one thing and that is the election process in the United States. Of course, every President meets obstacles and problems that require hard choices. I am also sure that the staffers around him/her have access to some high level information and that there is weight on their shoulders too. But among everything, if you get passed all the frightful things about working in the White House, I've found myself to want to work there. It must be so awesome! While watching the series you might think that the way the characters approach their jobs is a bit silly. But I don't. I find that the more pressure you feel, the more you need to let off steam, therefore every second you get to breath you find joy in the little things. 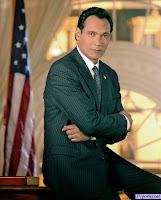 But the beauty of it is that it got me interested into politics. When I see a political debate (let us stick with American politics for now), I cry. I do, they suck and they are boring. Nobody cares really, it's all fake anyway: every politician has 3 sentences prepared all the way through their campaign which they always find a way to fit into their answers. There vary from "I'm against abortion", "We must continue our mission of peace overseas" and "Tax cuts" or "Healthcare". That's it. They basically choose and vote for you based on what you think about abortion and whether or not you promise to cut taxes. But it is the same in almost every country now, so I don't want to alienate the US!
However The West Wing made me interested in the work that is put into the election campaigns. All the people, all the places, all the connections! There is always one who advises you on your clothing (eg. it is a well known fact that if the tie of the politician has either red or blue in it, it will be associated with the flag, therefore you get patriots on your side); there are your speech writers; your press consultant; your chief of staff and let us not even mention all the people who work for the first-lady-to-be! It is a wonderful enterprise, a wonderful job really. It is something you can't get tired of. You need your connections in the poll office, you speak with Congressmen and Senators. It is truly incredible. I never thought I would be interested in a desk job, but if someone asks me if I want to work in the White House, I'm going to say yes without a second of hesitation! 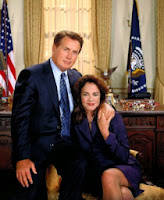 So yes, the series portrays work as it is. I'm not saying that they make it look easy so you want to do their job, nope, on the other hand they make it look really hard. But somehow I believe that working there makes you feel like you're making a difference in the world and that is a really good feeling!

Let me tell you what I think is wrong with the series. Only the President. I love this series because it captures perfectly the life of those who are workaholics by choice, those who have no choice but accept that their work is their life and those who struggle with moral issues in situations that require them to be emotionally detached. But as far as the President goes, he is not real. As sad as it is, we don't live in a world where real people with real feelings want to become politicians. It is a disgusting and corrupt society I know, and as sad as it is, it is the truth. But Jed Bartlet is a historian, a man of arts, a caring father and husband and he became president because he wanted to change the world. And I hope that in the beginning that's the same reason for everyone who decides to become a politician, but, with all the attacking, the fighting and blackmail, by the time someone actually gets to a point where what they say actually matters: they get scared and do nothing. Power is such a sweet thing to have that nobody dares to jeopardize it (except for the idiots who became overwhelmed and turn into a less successful but equally pathetic dictator from the 30's!). They only smile and oblige or do something to ensure their power which only results in doing exactly the opposite of what they meant to do in the beginning. 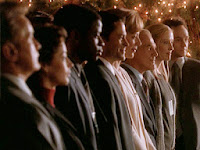 I want nothing more than for all politicians to be like President Bartlet, but unfortunately that is not the case. So yes, I love this series and I have nothing against it. It might not be realistic for me, from that, and only that point of view but otherwise it is creepy how lifelike the stories and reactions of the people are. The writers didn't forget to feed their cast (like they did in 24 after season 1...); they didn't forget that sleep deprivation causes mistakes and bad judgement and, in one word: fatigue. Family and friends are the most important things, along with moral values and safety. And the second you hear the opening credits theme song... hmm, you shiver!
This is a great series, and if you can get your hands on a DVD with subtitles, make sure to check it out!