The following piece is a copy+paste from the site:
1stwebdesigner
I'd rather not write myself, and sorry for stealing but this is urgent matter. Not being an American I can't really write to my senator or congress representative, however I can put the word out on my blog.


Please read the following information and diffuse it, because all the advanteges the Internet has offered as so far are in danger! 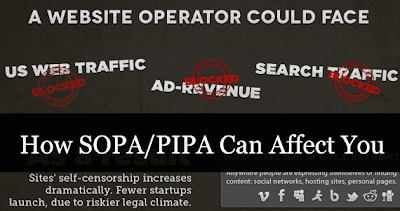 "The United States government has been facing an intense amount of pressure, mostly from the entertainment and computer software publishing companies for years to find some method of stopping the online piracy that is allowing people to own copies of their merchandise for free. This is of course understandable, nobody wants to see something they worked hard on to create something of quality be disrespected by people gaining access to it for free.

However, what the U.S. House of Representatives and the Senate have planned for their respective bills is not a way of just putting a halt on online piracy. Tech giants such as Mozilla and Google who once supported these bills, now are on the offensive in trying to ensure they never get passed. Before going any further into how this affects the everyday internet users, let’s first get a good understanding about both bills.

Let’s begin by first breaking down the first of the two bills that were introduced, PIPA. PIPA is an acronym for the Protect IP Act, and was first introduced to the U.S. Senate on May 12, 2011 by Senators Patrick Leahy, Orrin Hatch, Chuck Grassley. It is also good to take note that PIPA is a re-written legislation, the original being the failed to pass Combating Online Infringement and Counterfeits Act (COICA) of 2010.

PIPA, if passed, will give  U.S. corporations and the government the right to seek affirmative legal action with any website that they see as enabling copyright infringement whether of U.S. origin or not. Here is a breakdown of all that they will have the power to do.

- Force U.S. internet providers to block access to websites deemed as enablers of copyright infringement
- Seek legal action by suing search engines, blog sites, directories, or any site in general to have the black listed sites removed from their website
- Will be able to force advertising services on infringing websites, and those supporting of them, to remove them from their advertising accounts
- Companies will also have the power to sue any new websites that get started after this bill is passed, if they believe that they are not doing a good job of preventing infringement on your website

SOPA is an acronym for the Stop Online Piracy Act, and is a bill introduced to the U.S. House of Representatives by Represenative Lamar Smith on October 26, 2011. In similarity with PIPA, SOPA is a build on a previous legislation. This legislation being the PRO-IP Act of 2008.

The U.S. Attorney General can now seek a court order that would force search engines, advertisers, DNS providers, servers, and payment processors from having any contact with allegedly infringing websites
It will allow private corporations to create their own personal hit lists composed of websites they feel are breaking their copyright policies, ironically this doesn’t have any odd feelings of a legal mafia at all. These companies will be able to directly contact a website’s payment processors a notice to cut all off payment involvement with the targeted website. This payment processors and website of question will then have five days to act before it is simply taken down.
Payment processors will have the power to cut off any website they work with, as long as they can provide a strong reason of why they believe this site is violating copyrights


Where Do the Tech Giants Stand

Originally, the majority of technology corporations that put their input into these bills, were in support of it. Companies like Apple, Intel, Corel, Dell, Microsoft, Adobe, and 23 other big name tech companies are supporters under the BSA(Business Software Alliance). However, there is still hope in the realm of big name support of tech giants. Two of the biggest in Mozilla and Google, have gone public with their issues with these bills and their reasons why they can no longer offer their support after further research was done.

Mozilla is strongly against both acts because of its use of DNS filtering in both. Mozilla, like the majority of the tech world, believes that by using DNS filtering this will open up more security risks and slow down the system’s up and coming extension DNSSEC.


How Does This Affect You

Well by now one probably has gained a good understanding of what both PIPA and SOPA are, and is wondering how exactly will these acts will directly affect how citizens use the internet. Well in all honestly, a lot of things will change.


Blog Sites like 1stwebdesigner could be blocked or shut down

As stated prior in what PIPA and SOPA are and what will they enable U.S. government agencies and private companies to do, the internet will become a hunt for any little bit of possible copyright violation. Of course the government loves blogs and bloggers, so it is only natural to think that they will receive a lot of special attention. These acts make it the blog owners responsibility for everything that is displayed on their site, including the comments of visitors.

So say an article is published one day featuring a logo, or trademark, of corporation and that corporation doesn’t like that it is being put on display on the site. Now the author of this article could have used it as a teaching method, critique, praising good design, or anything you can think of, it doesn’t matter. With these acts being only direct enough to give an area for attack, and vague enough to manipulate and twist seemingly any possible way, any type of accusation can be made and found true.

These acts are stopping developers from coming up with the next big thing in the online market that could change how we use the internet. Let’s say that these acts were around back when the internet was started, how many of the most popular sites would still have come into fruition. There would be no Facebook, YouTube, MediaFire, SoundCloud, Twitter, DropBox, or any other site that can be targeted as a place where online piracy could take place. Is it even possible to think about what the internet would be like without sites like this?


Legal Action Over A Child Singing A Song

It is quite oblivious that none of the people on sites like YouTube have been given permission from record label execs to sing their favorite song, and then proceed to post it on a video sharing site. However will that be a problem for the record execs?

The site the child will have posted the video on will be put under pressure to resolve this issue, or face their site being put on the blacklist. This child, and her family, could also very well face legal action with either the site or the record label the song that was sung has copyrighted.


The U.S. Government Hope They Will Spark Global Change

The U.S. government officials and private corporations aren’t only concerned about how these bills will work out in America, they are hoping that they will have the influence to get other nations to follow suit with these acts passing. That means if these acts pass, then the next country this could be coming toward may be yours.


What Can We Do

The House Judiciary Committee will be voting on SOPA, and likely passing it TOMORROW!! Once the bill has been passed by the committe, it will be able to be passed at any time by the House of Representatives. The internet community has always been an active and vocal group about anything we diassaprove of, especially when it is hurting the overall internet experience. This is the time to now show this passion for what the community of professionals, and users, love by telling the U.S. government exactly how you feel. Below, you’ll find some helpful ways so you can become vocal about this presssing issue.

This is the most important thing anyone can do, because this is how your voice can be heard in the process. It is the Senators duty as an elected official to do what is right by, and listen to the will of the people who elected them. If they don’t hear the input from the people, then they’ll have no idea of how anyone feels. Americancensorship.org has a great tool that will help you find who your Senators are, their contact numbers, and get you right in touch with them. They also inform you of speaking points to mention in your conversation before calling.


Inform Anyone You Know

Can you imagine how much stronger and effective the Occupy movement would have been if this happened a few years ago? It would’ve been a completely different playing field, and would have a lot more impact then what it already has on government officials. This movement couldn’t happen earlier because people were not informed and those that were just waited to see how things would affect them before deciding to take action. That philosophy has never worked, and will only lead to trying to get out of a disastrous situation you could have easily prevented.

You don’t have to be a U.S. citizen to take charge here, online petitions is a great way to get a global reach on how people feel. The most important thing is that everyone is heard, in any shape or form.

Being unaware of what is going on is only allowing for acts like these to pass through without anyone knowing. Being an informed individual about what is going on in the political world, only makes you more capable of being an advocate for change in a positive fashion. Below you will find some links to good articles, and videos about SOPA and PIPA."

The following image is from: http://theoatmeal.com/