Why Is Center Stage The Best Dance Movie Ever Made?

First of all, let us divide these movies into categories. The first one are the classics: These are exceptionals, because we have musicals made out of them.

All of these movies are classics because they have a story. Dancing, or in some cases singing is used to tell us that story. But the story itself stands alone, without the dancing or the singing. What makes dancing movies shitty nowadays is that the story couldn't stand alone, hell, it doesn’t even stand with the dancing!

Let’s take another turn. We have movies that are, let’s admit it, basically remakes because they have the same stories:

With the exception that one is good at it, the other one SUCKS! (see the highlight? Those are the winners!). Then we have the sequels (yes, I know, Staying Alive is a sequel too, but it is more widely known without mentioning Saturday Night Fever!):

Two movies who were only made to entertain Richard Gere and Antonio Banderas fans (the second one is actually a Sister Act 2 - Back in the habit remake with dancing, instead of singing). But to be honest, these are still good, because again, they have a story!

And of course everybody’s favorite trio:

Now, the reason why Center Stage is THE BEST ever is that it doesn’t have the GODDAMN CLICHÉS every else 21st century dance movie has concerning the main character:

- They don’t suck at the additions in the beginning of the movie, because they are missing ’something’
- They don’t have god awful siblings who do not add anything to the movie whatsoever
- They actually learned dancing in a school and it doesn’t only come from their hearts
- They don’t come from the ghetto or a little city to witness what horrible secrets the ’big city’ holds
- They are not boring characters
- They don’t retry the addition, when, for some reason, they somehow now possess that ’something’ they didn’t have in the beginning
- They don’t have dead relatives that ruin their mojo
- The answer to every question is not goddamn “HIP HOP”!!!!!!!

Center Stage is about three young girls, Jodie, Eva and Maureen who get accepted to the American School Of Ballet. At the end of the year they will perform in a workshop, in front of an audience full of ballet school owners, so they get a chance to be offered a job as ballerinas all over the great theaters in America.
First let’s talk about Jodie. She’s got the heart, but not the feet to be graceful. However she is wonderful in any other genres of dance. Eva has the moves, the body, but not the attitude. She keeps talking back and the teachers don’t like that. Maureen is the most likely to succeed among them, but she is unhappy. She is forced into this world by her mother, and not only she is harmed mentally, but physically as well. She decides to quit for her own good. 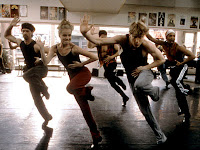 First of all, what I hate in the other movies, is that the protagonist doesn’t get accepted, because they are missing something. Now, Jodie is taken, because even if her figure isn’t perfect, the school can help with that. If the school is looking for already made ballerinas, they shouldn’t be a school! Schools are places where you can learn, if she is missing something, the school should be the place that teaches it to you! Also, this movie has subplots! You hear that 21st century dance movies? S-U-B-P-L-O-T. Of course this movie has a love story too, but it isn’t effing predictable from neither the poster nor the first second you see the characters! It makes you wonder, interested in their fate!
This school helps them find theirselves, 90 minutes aren’t spent by other people telling them that “they are good, don't give up!”, it goes unsaid. Yes, they have uncertainties but they face actual problems: break ups, anorexia, lack of social life, etc. Things you’d expect a ballerina to go through, and they do. That is what makes this movie, above all, down to earth and heartwarming.

And last but not least, the last dance. Every good dance movie has a big finale and I have noticed that lately the ONLY thing I am waiting for is the finale (and I am often disappointed!). And when your movie doesn’t make me interested, if it doesn’t keep my eyes glued to the screen, then you are doing something wrong. Center Stage got me glued from the first second. The selection of songs, the moves, the cast (THEY GOT PETER FREAKING GALLAGER!!! You can’t ask for better than that!!!), the stories, the colors! New dance movies miss colors! It is all just a black blur in front of a car lamp! I get it, I can see that the world is moving ahead and I don’t mind hip-hop dancing. It is awesome. What I miss is grace. And all those movies where people audition for a ballet school and their missing ingredient was ‘hip-hop’? Movie, you are looking for a beating!
In the end, this was the very first in this genre since the classics from the 80's. So all that I mentioned above, follow this one! (Don't forget that the next time you see a dance movie!)

Center Stage 2? Hmm… They get a 4/5. First of all, they make an effort. Unfortunately they can’t seem to avoid the ‘sibling’ and failed audition clichés, but they stay true to the meaning of “sequel”. Peter Gallagher and most of the dance teachers are recast. The story in itself is a bit predictable, but that doesn’t make it boring in this case. And the main characters have a charm. The last dance? I would’ve liked it to be longer, but it was OK.

Now, Step Up has made an effort. You have a story, you have grace, so good job. Then again, Step Up 2 is the same goddamn story, with less grace, and swapping the two main characters’ sex. (Also, the ending? That sucked! It is not supposed to be a fairy tale, but a movie about dancing. Remember screenwriters?) Step Up 3? Oh, god. I have no words for that.No grace at all, awfully predictable and the dancing is just… not interesting ANYMORE!!!!! I can say OK to 34 dance movies with R&B hits and hip-hop; but the 35th is just going to piss me off!

Other than these, all the dance movies are now focusing on ethnicity, and they should NOT! We are going to get a movie from every country (the latest one is from the latino community), just so they can show us how awesome the everybody is at hip-hop. Wonderful. Who’s next, the chinese?

Oh, yeah, and they are making a Dirty Dancing remake in 2013... that should be flawless!

To end my review, please watch the ending of Center Stage. Until the next item on my list!