What’s next on my list? Jem And The Holograms

Yes, I am truly outraged... If you don’t get that sentence, it means that you don’t know what Jem’s theme song is, let’s listen to it now, shall we?

Yes, Jem as you can see is a cartoon from the 80’s (1985-88 to be exact). It was entirely three seasons with 65 episodes aired. But why am I discussing this now? Because there is something that drives me completely insane, it is a thing that is so beyond stupidity that there should be a law against it, and for some unknown reason no reviewer has ever commented on it, AND I’VE HAD ENOUGH!

Let me tell you what the story is about, because believe me, this sentence from imdb.com: Jerrica Benton is secretly the leader of the glamorous and exciting music group, Jem and the Holograms. Which is supposed to be the summary is somewhat correct, but on the other hand completely misleading and it totally avoids the main point of the whole story! 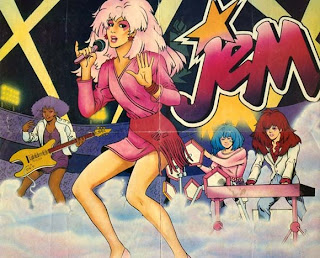 Jerrica, our main lead, has just lost her father. Her dad leaves her two things in his will, his label company: Starlight, which she shares with a guy named Eric (he is supposed to be the bad guy, but he fails constantly at it...). But previously Jerrica was the owner of a foster home for young girls, cleverly named Starlight Home and she has to work at the label to get the money necessary to keep the house for the girls. The second thing her dad left her is an alien. I am not kidding with you, I have no effing idea what that is! It is supposed to be a computer that has the mind of a woman. This computer is called Synergy, and she’s got purple skin. She is able to create magic... Truly outrages alright, this is even harder to explain than I thought it would be! In an abandoned warehouse Jerrica finds this computer that gives her magical earrings that make her capable of chaging back and forth between two people: Jerrica and Jem. 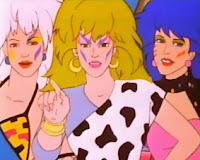 Why is this interesting? For some unknown reason, Jem is able to sing (I think it must be magic!), and she puts together a band with her best friends in order to be the new lead group at Starlight and get money for their house. The manager assigned to Jem & The Holograms is Rio, Jerrica’s boyfriend.
What creates tension is that Eric, the label dude, does not like neither Jerrica nor Jem, even if they bring him money, what kind of an idiot businessman are you? But because his plan is to invest in the wonderful Misfists, a band of three girls who commit every crime known to men in their music videos. Not that the police ever shows up! They burn down a house, their car almost falls into a ravine, thugs try to beat the shit out of the girls in practically EVERY SINGLE EPISODE! But nope, the cops don’t care, so no biggie!

In every episode Jerrica touches her wonderful earrings and turns into Jem, she performs, they get great reviews and then she turns back. Besides the unnecessary stereotypes, as in, her ginger girlfriend takes the place of a blonde girl and there is only one black protagonist who fortunately gets the only black guy to hit on her... Here comes the only thing that I’ve hated so-so much! Of course the main lead from the Misfits has her eyes on Jerrica’s Rio. And not only her, but Jem as well... OH DEAR LORD! I HATE THIS! Jerrica does not tell Rio that she has two personalities! And she tries to hit on him when she is in her Jem form, while she knows that Rio thinks they are two people and he loves Jerrica. YOU DUMB SLUT! She is consciously trying to make him cheat! You think she can't top that? Oh, SHE CAN! She gets upset that Rio doesn't like the Jem version of her, instead of being happy that he isn't someone who is willing to cheat on whoever, whenever!

And in episode 25, when for some reason she got tired of Jem and refuses to change, she sees Rio looking at an article with Jem’s picture in it and asks "Should I be jealous?” YOU DUMB FUCK! You made him fall in love with your other persona, you shouldn’t treat him like a cheater now! So she struggles, and in the end... I don’t know if she tells him or not, the animation in this episode is so shitty! Just look at this scene from another episode, please, look at 10 seconds of this shit, it’s horrible! I can’t even finish it! It only got worse since the first episodes!

Erm, symbolism much? Let me guess, drugs are bad for you!

So yeah, I hate her, and she admits "I’m jealous of myself.” So was it worth it? NNNOOOOOO!!!!!!!
You’re an idiot!
I grew up on 4 episodes, I had a tape you see, and it wasn’t until three years ago that I found out that that wasn’t just and awful movie but a matter of fact a cartoon that had +61 episodes I hadn’t seen. Just so you understand the problem, after 4 episodes I was convinced this was over, it had an ending. So, how exactly did this continue? My further research showed me that basically those 4 episodes repeated themselves... so I didn’t miss out on much. Being a big fan of the 80’s music, of course I loved almost all of the songs! (Let’s listen to a couple right now, shall we?)

But then again, in the end I’ve found it highly offensive and stupid! I think it is supposed to enforce girl power, but I just feel offended and ashamed for my gender... Sorry, I do. The animation got worse from episode to episode, the story itself has no moral teachings or lessons you should learn at all. The characters are not so likeable and there is no one that begs for you to find any sympathy for them. In the end I actually felt sorry for the Misfits...
And as unbelievable as that may sound, very, very probably Hannah Montana is a rip off of Jem. I know, you wouldn't think this stupid story could be used again... Surprise! That would also explain why I hate Hannah Montana, Jem might not have good animation, but at least it has good songs... Hannah? Not so much... /comics from: Least I Could Do.com/

So yeah, the writers knew something when they wrote the lyrics "Outrages, truly truly outrages!”

Check out Nostalgia Chick’s review on Jem by clicking on this link!

Thanks for reading, until the next item on my list!
Bejegyezte: CsorEsz91 dátum: 2:50 PM